Dave and Judy Diekhoff wanted a host of questions answered before they committed to having a colossal wind turbine installed on a small plot of their 200-acre farm near Delavan.

They wanted to know about potential effects on property value, noise and the longevity of such structures. Most importantly, they wondered about the feasibility of aerial crop dusting for their property and that of their neighbors.

The massive structure that sits on their property today is part of the sprawling Rail Splitter Wind Farm that encompasses parts of Tazewell and Logan counties and straddles Interstate 155 near Delavan.

Some of the 67 turbines installed earlier this year as part of the project already are pumping electricity into the grid, and the rest of the structures should be operational next month, according to Bill Whitlock, director of development for Horizon Wind Energy.

Once those turbines begin churning – producing 100.5 megawatts of electricity per year, enough to power 30,000 homes – the state will mark a green milestone.

With Rail Splitter, Illinois will produce more than 1,000 megawatts of wind energy annually, pushing it further into the top 10 of wind-energy producing states.

Illinois currently ranks 10th in the nation with 915 megawatts of wind energy production per year, according to the American Wind Energy Association. Rail Splitter and two other projects are under construction or just completed.

The steel wind towers and turbine propellers of the Rail Splitter Wind Farm northwest of Lincoln should start spinning and producing electricity for the power grid sometime in August, project developers say.

“At some point in August, it will be commercially operational,” Whitlock said of the project.

The farm consists of 67 General Electric 1.5-megawatt turbines with the capacity for 100.5 megawatts — enough to power more than 30,000 average Illinois homes each year.

Each turbine is more than 262 feet high and includes three blades that are each 125 feet long and a nacelle — which contains the gearbox and generator — the size of a camper trailer.

Houston-based Horizon operates more than 15 wind farms across the country, including the Twin Groves I and II wind farms in eastern McLean County. Those farms, which became operational in March 2007 and early 2008, respectively, have a combined 240 turbines and a generating capacity of 396 MW.

Horizon also is developing the Top Crop I wind farm, which is of similar size to Rail Splitter, in LaSalle County. That farm is the first phase of a larger project that will include wind farms in Grundy and Livingston counties.

Illinois ranks 10th in the country for existing wind energy capacity and 16th in potential capacity. There are 17 wind projects operating in the state so far, accounting for more than 1,100 MW of capacity.

Illinois gets about 2 percent of its electricity from wind.

Construction began on Rail Splitter Wind Farm, on Interstate 155 in Logan and Tazewell counties about 60 miles from Springfield, in July 2008, Whitlock said. Completing a trench for underground wiring was one of the final construction elements.

Horizon officials say the annual environmental benefits of Rail Splitter will be equivalent to taking 18,000 cars off the road.
:} 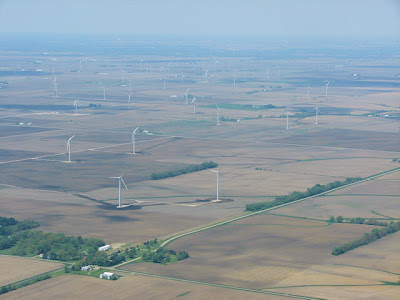 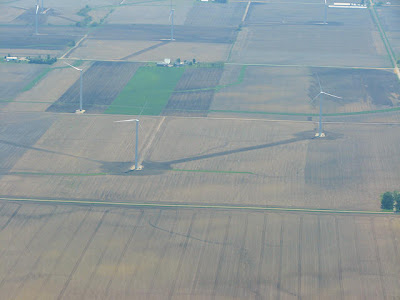 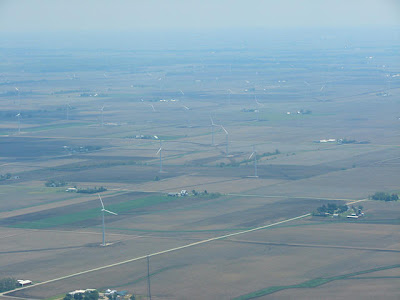 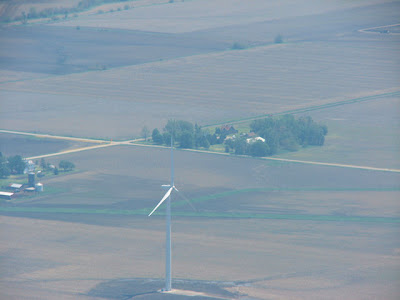 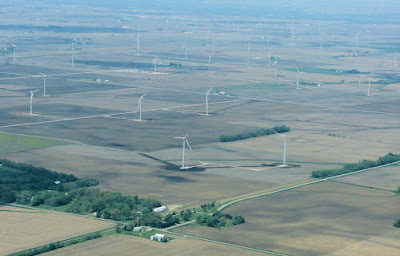 I am in awe of these wind turbines!

No, I’m not the one who took these pictures, but my publisher Jan did, and they were in yesterday’s LDN.

LDN does not copyright their photos, so they are free for the taking for anyone who wants to copy them.