Why buying your food locally is so important in so many ways. One of corporate capitalism’s goals is for people to lose their common sense. Some forms of food have been moved all over the planet for 20,000 years. Certain forms of food lend themselves to this process nicely. The commodity grains for example have been move by draft animals, boats and now trucks since their mass cultivation began. Even this can be moderated a bit. But to be shipping all manner of food all manner of places in all types of weather is just dumb.

I boil this down to a single sentence. Do I need to eat apples in Illinois in the winter? If I do should it come from Ecuador? (this is true) I have an apple tree in the back yard. Shouldn’t I just freeze some? But then irrational uses of our transportation system is a hallmark of the modern world. But there is more to consider. Local foods encourage carbon sequestration in the plants themselves, their reintroduction into the soil by composting, and the enhancement of your personal health. These are a few things to consider when you buy only food grown within a hundred miles of your house.

Then there is the ethics of factory farming of any living thing. Anyway planting a garden and harvesting local free stuff only makes sense. 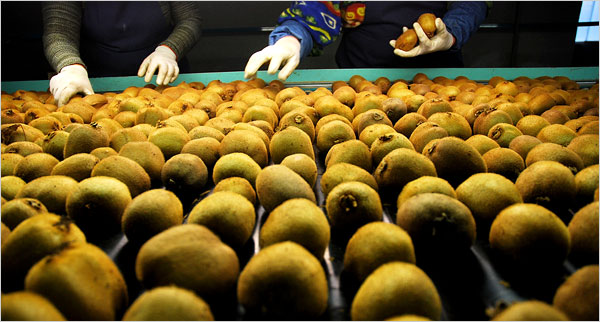 Kiwis grown in Italy are examined — and damaged fruit is discarded— before being shipped.

Cod caught off Norway is shipped to China to be turned into filets, then shipped back to Norway for sale. Argentine lemons fill supermarket shelves on the Citrus Coast of Spain, as local lemons rot on the ground. Half of Europe’s peas are grown and packaged in Kenya.

In the United States, FreshDirect proclaims kiwi season has expanded to “All year!” now that Italy has become the world’s leading supplier of New Zealand’s national fruit, taking over in the Southern Hemisphere’s winter.

Food has moved around the world since Europeans brought tea from China, but never at the speed or in the amounts it has over the last few years. Consumers in not only the richest nations but, increasingly, the developing world expect food whenever they crave it, with no concession to season or geography.

Increasingly efficient global transport networks make it practical to bring food before it spoils from distant places where labor costs are lower. And the penetration of mega-markets in nations from China to Mexico with supply and distribution chains that gird the globe — like Wal-Mart, Carrefour and Tesco — has accelerated the trend.

But the movable feast comes at a cost: pollution — especially carbon dioxide, the main global warming gas — from transporting the food.

Under longstanding trade agreements, fuel for international freight carried by sea and air is not taxed. Now, many economists, environmental advocates and politicians say it is time to make shippers and shoppers pay for the pollution, through taxes or other measures. Transportation choices such as car vs. subway have a big effect on carbon footprint, but experts say food choices have nearly as much impact. (By Ramin Talaie — Bloomberg News)

In moving for a year to New York City from Ann Arbor, Mich., a small Midwestern college town, the biggest change for me has not been the shift from a house to a high-rise and a living space that is only one-third as big.

It is the absence of a car.

The difference was apparent the first day. As in previous moves, settling in included many trips to the hardware store for this and that. But this time it was not a simple matter of getting directions and driving there. It was confronting a subway system with 26 different lines. And, after reaching Home Depot and making my purchases, I had to figure out how to get them home. (I learned that most stores in Manhattan offer delivery services for a fee.)

Even the most mundane details of daily life, including meal planning, have changed. In Michigan I had the luxury of “last-minute cuisine,” routinely making a dinner plan at 6 p.m., heading for the grocery store that is a three-minute drive from my house, grabbing a few things and returning home, all inside of 20 minutes. Here the grocery store is a 15-minute walk from our apartment building. The return trip is longer because I am lugging my purchases in a wire shopping cart. With each grocery outing taking at least 40 minutes, I plan ahead and shop for groceries only once or twice a week.

Traveling by subway has not proven to be a timesaver, but the time is allocated differently. On a 60-minute car trip you can while away the time by listening to the radio or music. On a subway you can read. The rush hour is still stressful, but the defensive maneuvers are different. Sandwiched into a subway car, you have to be watchful of backpack-wearing riders who never seem to realize how often their backpacks whack other passengers.

If you want to calculate how much you save by buying locally:

Home The food we consume contributes to climate change. The production, packaging and transportation of food all consumes energy and results in carbon emissions which threaten to raise average global surface temperatures.

However, not all foods are equal…

This website also offers personalised and practical ways to reduce the carbon footprint of your diet, reducing your impact on climate change.