That is a very interesting question. At one level is is just a case of a bad attribution. It would be like saying if Jane’s stopped publication then there are no airplanes. At another level, as all the authors say that were involved, they may have just run out of new and bright things to say. It could also be that with many other things predicting the END OF THE WORLD, when it never happens, the readers got bored. That several major religions have preached that for thousands of years and nobody has gotten bored yet would speak against that. I have always been skeptical about the doom and gloom nature of the blog itself but when the CIA and the Defense Department believe something then, you have to believe it has some credibility and really oil is a finite resource. So with deep water drilling and fracking we may just be buying time. Then there is global warming. Anyway I drivel on.

Following on my recent post bidding Farewell to The Oil Drum, I’d like to have a look at what I view as our longer term future for energy production and consumption.

As noted in my previous post, for the time being the combination of unconventional oil extraction and the ramping up of extraction of natural gas (from both conventional and unconventional sources) has continued to push the point of peak oil production out into the future, defying the predictions of the more pessimistic peak oil observers. During this period we have seen a boom in the research and development of solutions to help us eliminate our dependency on fossil fuels, which I’ll explore in this post.

Solutions can be divided into 3 groups :

The graphic below shows the energy available from renewable energy sources annually compared to global energy consumption. The numbers are intended to give a rough idea of relative scale – for any given energy source a wide range of estimates can be found in the literature so the numbers are indicative. 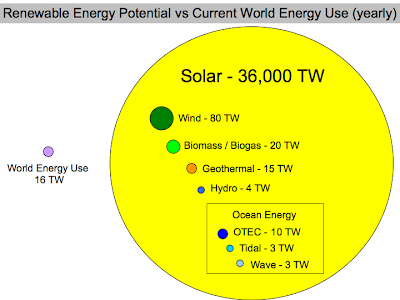 These numbers in some ways understate the amount of energy potentially available (ignoring solar power potential at sea or in space, for example, or wind power at high altitudes or far offshore, or geothermal power deep below the surface of the earth) but still serve the demonstrate that the renewable energy available to us is orders of magnitude larger than our current global energy consumption.

The contribution made by renewable energy to our energy needs is expected to exceed that made by gas (and double that made by nuclear power) by 2016, though progress needs to be accelerated if we wish to create a sustainable energy system.

Solar power is the largest energy source available to us, dwarfing all other sources – renewable and non-renewable. Approximately 36,000 Terawatts of power could be captured by land based solar power generation – compared to current global energy use of around 16 TW. As a result, most of the plans floated for shifting to 100% renewable energy (examples include proposals by Mark Jacobson and Stuart Staniford and local plans for countries like Germany and Australia) rely primarily on solar power.

Solar power is not only the largest energy source available to us but it is also the fastest growing energy source, with solar power generation increasing by over 58% in 2012.

There are a number of options for harnessing solar power – power generation using solar photovoltaic (PV) cells and solar thermal arrays along with passive solar techniques such as solar hot water heaters.

I have been of the view that solar thermal power generation (also known as concentrating solar power or CSP) would become our most important source of power in the longer term. This view was based on a number of advantages that solar thermal possesses – it does not require rare or expensive materials (enabling it to scale without hitting resource limits), it can be built on (and is best suited to) arid land that has few other uses, it can incorporate energy storage (thus avoiding the intermittency issue), it is compatible with the existing centralised generation model and it can be combined with traditional sources of power generation (coal or gas) in hybrid power plants that allow an easy transition using existing connections to the electricity grid.

An area of desert around 250 km by 250 km covered with solar thermal power generation could supply all the world’s current electricity demand.

Go there and read a really long article. More next week.