What has the Oil and Coal Industries freaking out? All the money they are missing out on by not sitting at the cool kid’s table. But then like Enron, and the AIG criminal frauds….they are not the smartest guys and gals in the room.

The new installations will help New York reach its aggressive renewable energy goals – by 2015, the tate wants to receive 45 percent of its electricity through energy efficiency and clean renewable energy.

The New York Power Authority will issue a Request for Expressions of Interest for the purpose of exploring a public-private partnership for the installation of up to 100 megawatts of solar photovoltaic systems, including roof-mounted and ground-mounted PV arrays at municipal facilities, public and private schools, businesses and state agencies throughout New York. The deadline for receipt of RFEI proposals is July 7, 2009.

If the RFP is issued, it would likely result in a 2010 project start date.

In an attempt to be more environmentally friend, New York City Mayor Michael Bloomberg proposed that wind turbines be installed on top of the city’s skyscrapers and bridges.

The city has also issued an RFP last year for private solar developers to purchase, install, own and maintain solar panels on city-owned buildings in all five boroughs as part of PlaNYC.

The Federal Government says it wants to create the largest solar energy project in the world.

It says the project will be as close as possible to the existing energy grid.

The funding is part of the Government’s commitment to spend $4.5 billion on reducing carbon pollution.

The project will include up to four individual solar plants generating on average the same amount of energy as a coal-fired power station.

Prime Minister Kevin Rudd says the most appropriate sites will be chosen through a tender process to be completed by next year.

“The location will be determined in terms of maximum access to sunlight, maximum proximity to the electricity grid to minimise costs of transmission systems, as well as a number of other technical and design factors as well,” he said.

Mr Rudd has also announced that Australia will become a full member of the International Renewable Energy Agency (IREA), which will hold its first meeting in June.

Currently the largest operating plant is in California in the United States.

The Government’s Solar Flagships program hopes to create three times as much energy as that project. 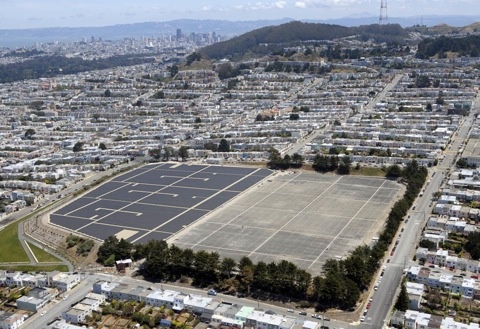 Recurrent Energy San Francisco, in a deal with Recurrent Energy, plans to place a 25,000-panel photovoltaic solar array atop the city’s largest reservoir.

San Francisco’s Board of Supervisors has approved a plan to build what would be one of the largest solar photovoltaic arrays in California. With five megawatts of capability spread over 25,000 panels, it will, if completed, also be among the largest municipal solar projects in the United States.

(Larger nonmunicipal arrays exist, including a 14-megawatt, 70,000-panel array at Nellis Air Force Base in Nevada.)

San Francisco’s proposed system — which would produce roughly the amount of energy used by 1,000 households, the developers said — would bring the city’s total solar capacity to seven megawatts. It will be used to power municipal properties like schools and government offices.

“Earlier this week, San Francisco took another major step towards achieving our commitments to reduce greenhouse gases and grow our green economy,” said San Francisco’s mayor, Gavin Newsom, in an e-mail message. “With this single project, we will more than triple San Francisco’s solar energy production, build California’s largest photovoltaic system and help lead the state towards a future of clean, renewable energy.”

Under the deal, Recurrent Energy, a local solar company, will assume the initial financial responsibility for the panels, as well as pay for continuing operating and maintenance costs. In return, the city incurs no upfront expenses, but is obliged to purchase energy directly from Recurrent Energy at a cost of 23.5 cents per kilowatt-hour, plus 3 percent per year.

In years 7, 15 or 25 of operation, the city has the option to purchase the array outright at fair market value or $33 million — whichever is higher.

1 thought on “Solar Power Is Ramping UP – Projects announced in New York, Australia and San Francisco in the last couple of weeks”