Oil that is, Texas Gold….Hmmm maybe like population bustin, human cancer makin, pollutin the atmosphere…dead plants and animals from the past black gunk. 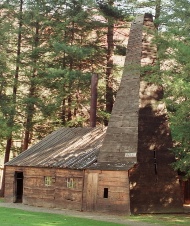 The Associated Press A replica of the well and tower stand over the site in Titusville, Pa., where Edwin L. Drake drilled the first oil well in 1859.

This week marks the 150th anniversary of the first oil well drilled in Titusville, Pennsylvania by “Colonel” Edwin Drake. The commodity would prove essential to the development of modern societies, enabling communications, travel and trade on a global scale.

But its central role is now facing unprecedented challenges.

Governments are concerned about the need for energy security and reliable supplies. The threat of climate change requires shifting away from fossil fuels that currently dominate the world’s energy mix. And fears of “peak oil” — the notion that half the world’s reserves have been pumped and that global production is now on a slow path of decline — have gained followers as prices have soared.

How much longer will the “Oil Age” last?

In our own opinion page on Monday, Michael Lynch, an oil consultant, suggested that the notion of peak oil amounted to uninformed fear-mongering, and that it ignored the realities of the modern oil industry. The bottom line, Mr. Lynch argued, is that the world is not about to run out of oil and that new exploration and drilling technologies continue to expand the pool of global reserves

One hundred and fifty years since the discovery of oil at Titusville, Pennsylvania, it is time to reflect on what are the next steps towards energy independence.

One hundred and fifty years ago, give or take a few days, in the sleepy lumber town of Titusville, Pa., “Colonel” Edwin Drake was persistently hammering a pipe into the ground in search of a replacement for depleting whale oil as a fuel for lamps. At a depth of 69 feet below ground he finally struck oil, and the world changed forever. Over a century and a half his 25 barrels per day well would give rise to a global industry of 85 million barrels per day, making oil the world’s most strategic commodity, one that supplies 40 percent of the world’s energy.

Just like in Drake’s own life — he died two decades later penniless — oil has been both a curse and a blessing for humanity. It has been a driver of seminal events and a backdrop behind great powers’ foreign policy. During World War I, “the Allies had floated to victory upon a wave of oil,” as the British statesman Lord Curzon noted. The post-war contention between Turkey and Britain in the early 1920s over Iraq’s oil-rich Mosul, Imperial Japan’s expansionist policy of the 1930s that led to a four-year war in the Pacific, Adolf Hitler’s invasion of Russia, America’s repeated military interventions in the Middle East and the “New Great Game” currently taking place in Central Asia have all been tied to oil dependence.

Why Oil Still Has a Future

( :} This is an excerpt from a much longer piece…the first paragraph was …titusville blah blah)

Why this debate about the single most important source of energy—and a very convenient one—that provides 40% of the world’s total energy? There are the traditional concerns—energy security, diversification, political risk, and the potential for conflict among nations over resources. The huge shifts in global income flows raise anxieties about the possible impact on the global balance of power. Some worry that physical supply will run out, although examination of the world’s resource base—including a new analysis of over 800 oil fields—shows ample physical resources below ground. The politics above ground is a separate question.

But two new factors are now fueling the debate. One is the way in which oil has taken on a second identity. It is no longer only a physical commodity. It has also become a financial asset, along with stocks, bonds, currencies and the rest of the world’s financial portfolio. The resulting price volatility—from less than $40 in 2004, to as high as $147.27 in July 2008, back down to $32.40 in December 2008, and now back over $70—has enormous consequences, and not only at the gas station and in terms of public anger. It makes it much more difficult to plan future energy investments, whether in oil and gas or in renewable and alternative fuels. And it can have enormous economic impact; Detroit was sent reeling by what happened at the gas pump in 2007 and 2008 even before the credit crisis. Such volatility can fuel future recessions and inflation