What do you think Industrial America has against the Appalachian Mountains?

NEW HAVEN, W.Va. — Poking out of the ground near the smokestacks of the Mountaineer power plant here are two wells that look much like those that draw natural gas to the surface. But these are about to do something new: inject a power plant’s carbon dioxide into the earth.

The inside of the plant. 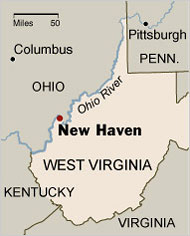 The Mountaineer plant in New Haven is ready to inject carbon dioxide into the earth.

A behemoth built in 1980, long before global warming stirred broad concern, Mountaineer is poised to become the world’s first coal-fired power plant to capture and bury some of the carbon dioxide it churns out. The hope is that the gas will stay deep underground for millennia rather than entering the atmosphere as a heat-trapping pollutant.

The experiment, which the company says could begin in the next few days, is riveting the world’s coal-fired electricity sector, which is under growing pressure to develop technology to capture and store carbon dioxide. Visitors from as far as China and India, which are struggling with their own coal-related pollution, have been trooping through the plant.

The United States still depends on coal-fired plants, many of them built decades ago, to meet half of its electricity needs. Some industry experts argue that retrofitting them could prove far more feasible than building brand new, cleaner ones.

Yet the economic viability of the Mountaineer plant’s new technology, known as carbon capture and sequestration, remains uncertain.

The technology is certain to devour a substantial amount of the plant’s energy output — optimists say 15 percent, and skeptics, 30 percent. Some energy experts argue that it could prove even more expensive than solar or nuclear power.

And as with any new technology, even the engineers are unsure how well it will work: will all of the carbon dioxide stay put?

Environmentalists who oppose coal mining and coal energy of any kind worry that sequestration could simply trade one problem, global warming, for another one, the pollution of water supplies. Should the carbon dioxide mix with water underground and form carbonic acid, they say, it could leach poisonous materials from rock deep underground that could then seep out.

Given the depths to which workers have drilled, they also fret that the project could cause earthquakes, although experts at the Environmental Protection Agency discount the risk of catastrophe.

While this comment was insightful…the problems they have had with Earthquakes in Texas is more troubling:

This project will demonstrate that the costs of carbon capture and sequestration make coal more expensive than nuclear and wind power. Let’s get it over with so that we can face up and move beyond fossil fuels. There’s less than a 100 year supply left so we have to do it eventually anyway; let’s do it before global warming destroys the climate that nurtured the development of civilization. Burning stuff is for cavemen.

YES – Burning stuff is for cavemen!!!!