I do not normally post twice in one day but the contrast of this story with the cute little story is laugh out loud funny and sob in you beer sad..

What’s worse than an oil rig leaking into the sea? 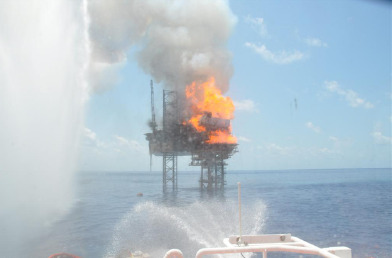 An endless fire on an oil rig, perhaps.  The West Atlas rig and the Montara wellhead platform operated Thailand’s PTT Exploration and Production burst into fire on Saturday, 10 weeks after it began spewing oil and gas into the sea. The fire can’t be extinguished as gas from the well is fuelling it, but PTTEP says it is preparing 4,000 barrels of heavy mud to pour down a relief well to try and kill the fire.

The leak is already looking like an environmental disaster – and the political fallout is also growing. Greens and the opposition are attacking the government, and controversy is building over the environmental reports carried out so far by the Australian government – with critics saying that surveys should have looked at the southern side of the rig instead of just focusing on the northern side, where the oil was thought to be billowing.

The West Australian government, meanwhile, is using the disaster to argue that the federal government should not take jurisdiction for offshore oil and gas.

As for the oil and gas industry, well, it doesn’t look good, analyst Peter Strachan told the ABC:

For what he said and more please follow the link….but then you know what he said, “OH Shit”.