First he hired Scott Pruitt to essentially undo everything that Bush and Obama had done. From Arsenic levels in your drinking water to the size and numbers of National Monuments. Then he signed an Executive Order approving Pipelines. Then he tried to roll back Auto Emissions. But it is in his public speeches that you get the true flavor of his derangement.

“The oldest and thickest sea ice in the Arctic has started to break up, opening waters north of Greenland that are normally frozen, even in summer. This phenomenon – which has never been recorded before – has occurred twice this year due to warm winds and a climate-change driven heatwave in the northern hemisphere … The sea off the north coast of Greenland is normally so frozen that it was referred to, until recently, as “the last ice area” because it was assumed that this would be the final northern holdout against the melting effects of a hotter planet.”

And then the Dotard says this: 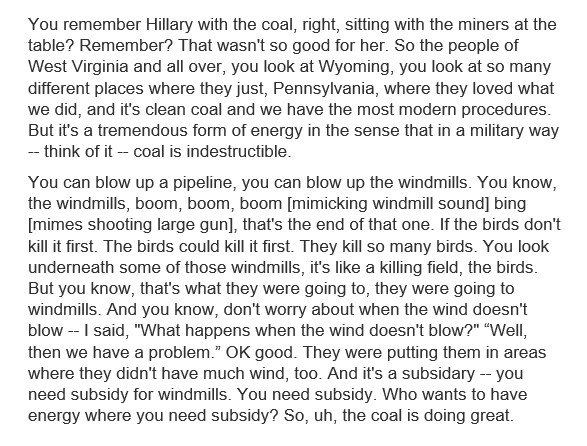 Here’s the transcript of Trump’s remarks at a New York fundraiser last week about coal and windmills.