New devices promise to cut energy use by giving consumers

more information. Critics say they aren’t worth the cost.

Not everyone thinks smart meters are such a smart use of money.

Utilities are spending billions of dollars outfitting homes and businesses with the devices, which wirelessly send information about electricity use to utility billing departments and could help consumers control energy use.

Proponents of smart meters say that when these meters are teamed up with an in-home display that shows current energy usage, as well as a communicating thermostat and software that harvest and analyze that information, consumers can see how much consumption drives cost — and will consume less as a result.

Such knowledge, however, doesn’t come cheap. Meters are expensive, often costing $250 to $500 each when all the bells and whistles are included, such as the expense of installing new utility billing systems. And utilities typically pass these costs directly on to consumers. CenterPoint Energy Inc. in Houston, for instance, recently began charging its customers an extra $3.24 a month for smart meters, sparking howls of protest since the charges will continue for a decade and eventually approach $1 billion.

Consumer advocates fear the costs could be greater than the savings for many households. They also worry that the meters will make it easier for utilities to terminate service — so easy that they will disconnect power for small arrearages that wouldn’t have caused a termination in the past. 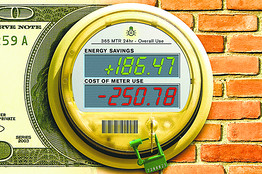 What’s more, the cost to consumers could go beyond the extra charges imposed by utilities. That’s because consumers usually are left to their own devices (literally) when it comes to adding the in-home displays and home-area networks that use data from the meters to control appliances and other pieces of equipment.

“What we’re most concerned about is that consumers realize real benefits from the meters” from the start, says Michelle Furmanski, general counsel for the Texas House Committee on State Affairs, which is considering legislation that could establish more protections against disconnections.

Ms. Furmanski says that her committee is also looking into the lack of information on meter deployments that is available to the public. The utilities have claimed “trade secret” protections for important financial details about their meter programs, including contract terms with vendors. Such secrecy makes it impossible for consumers to analyze why costs for what appear to be similar services vary so much among utilities.

Or There is This:

Opinion: Smart Meters Are Not the Answer to

Subodh Nayar is the Chief Operations Officer of Powerline Telco

Empowering consumers with actionable intelligence about their power will not be the outcome of the deployment of smart meters. Rather, it will be exactly what the utilities intend for it to be: a cost-effective way to implement real-time pricing, demand side management and distribution system monitoring.

Why? The buyer and seller of electricity have opposite power consumption interests. We (buyers) want to have control over the total power we consume and independent confirmation we are getting what we pay for. Electric utilities (sellers) seek to maximize the profits from a business model that requires them to generate, transport and deliver a consistent quality of power — regardless of demand — in exchange for a guaranteed rate of return.

Electricity generated on the power grid isn’t stored, so the grid is engineered and operated to meet peak levels of demand, which might only exist for a few hours per month. Without control over demand, responding to demand spikes will cause the quality of power supplied to fluctuate outside accepted norms, i.e., delivered voltage lags outside the 5 percent acceptable quality band, or frequency fluctuates outside its 2 percent quality band. That can only change if demand can be controlled, so utilities want three things from smart meters:

Metering has never been intended to reduce overall consumption.

A smart meter could report on whole house electricity usage, but it could not report on the demand from individual household devices. To make intelligent decisions about energy use, measurement should take place at the outlet, in the device or even on the power cable connecting the device to the outlet. This information can also track the quality of the power being delivered, which can affect the life of the device. Current, temperature and time data could be collected inexpensively, using existing technology, and transmitted over an Internet connection to one of the many service providers with a business intelligence platform. This data can be mined to reveal power quality issues that affect consumption. For example, a low voltage reading will tell you that the device will need to draw more current, increasing the total power cost for that device. Or if your dishwasher were drawing a current for longer than similar appliances, that could alert consumers that a maintenance check is in order.

I tend to think of them as just better meters myself. But to the industry itself they WILL give you a back rub and carry you to bed and tuck you in when you fall asleep:

Six summers ago on a particularly warm August afternoon, a tree that should have been trimmed triggered the largest power outage in American history.  The problem quickly spread from Ohio throughout the north-eastern United States – eventually leaving more than 40 million people without power.

The economic damages from the massive blackout have been estimated at $6 billion.  Smart grid technology could have prevented it from ever happening.  A digitised power infrastructure would allow consumers, utilities, and power generation sources to communicate for the first time.  In cases where the power grid is stressed, grid operators would be informed of the situation and could react accordingly.

It seems as if the dream of a smart grid may be finally coming true.  President Obama has made the technology central to his “rebuilding America” plan as a way to create new jobs and reduce America’s carbon footprint.  The stimulus package, enacted in February, included $38.7 billion for the Department of Energy (DOE), of which $4.5 billion is to go directly towards smart grid investments.

Personally technology IS as technology DOES. It is how yah use it yah know.