I plan on breaking 35 Environmental Blogs viewed today. Today we are going to focus on Blogs that take a “business” point of view. This is a tough category and I picked these Blogs for their content more then that they are they the BEST. Everyone knows the place you have to start is Wall Street. But first I must say:

Community Energy Systems is a nonprofit 501c3 organization chartered in Illinois in Sangamon County. As such we are dependent on public donations for our continued existence. We also use Adsense as a fundraiser. Please click on the ads that you see on this page, on our main page and on our Bulletin Board (Refrigerator Magnets) and you will be raising money for CES. We say a heartfelt THANK YOU to all who do.

As I said all business practices start in New York City and it gets no better than this: 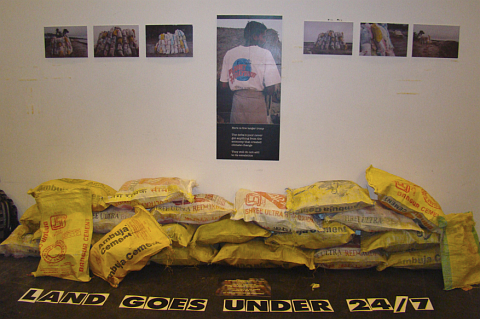 Lars Kroldrup Sandbags are part of a display highlighting the threat of rising seas in India and Bangladesh, at KlimaForum09 in Copenhagen — the “people’s summit.”

As the formal United Nations climate talks got under way in the belly of Copenhagen’s Bella Center on Monday, just up the road, a broad coalition of Danish and international environmental movements, civil society organizations and freelance campaigners were busy launching a self-described “people’s summit.”

“The Bella Center is the biggest case of disaster capitalism,” Naomi Klein, the author of a book on corporate backlash and the guest of honor at the opening, declared. “The deal we really need is not even on the table.”

KlimaForum09, as the event is called, is positioning itself as a shadow summit to the far more conspicuous one that has drawn tens of thousands of government officials, business leaders and environmental organizations for 12 days of talks in Denmark.

“We don’t represent vested interests such as bureaucrats, politicians, business or civil servants,” the Web site for the event has touted for weeks. “We do represent scientists, grassroots activists, academics, writers, artists and people from all walks of life.”

GreenBiz.com and Green Impact have partnered to release a new report, “Green Teams: Engaging Employees in Sustainability.” Based on interviews with green team leaders from Intel, Yahoo!, eBay and Genentech, as well as a review of the latest literature on employee engagement and green teams, the report provides an overview of the best practices companies are using to support and guide green teams.

It is a great resource for companies and organizations just beginning to think about creating a green team and for those ready to take their existing program to the next level.

What is a Green Team?

Green teams are self-organized, grassroots and cross-functional groups of employees who voluntarily come together to educate, inspire and empower employees around sustainability. They identify and implement specific solutions to help their organization operate in a more environmentally sustainable fashion. Most green teams initially focus on greening operations at the office, addressing such issues as recycling in the office, composting food waste, reducing the use of disposable takeout containers and eliminating plastic water bottles.

This focus on operations is evolving and some green teams are beginning to focus their efforts on integrating sustainability into employees’ personal lives, while others are bringing consumers into the equation and aligning their efforts to support broader corporate sustainability objectives.

Posted by: Yoni Cohen on November 25

As Business Week recently reported, Israeli cleantech is red-hot. Need additional evidence? On Nov. 15, both authors of the House-passed cap and trade bill participated in conversations about the burgeoning Israeli cleantech sector. Congressman Henry Waxman spoke at the Saban Forum in Jerusalem while Congressman Ed Markey addressed a packed house at Harvard’s Kennedy School of Government in Cambridge.

But can a tiny nation really be a global cleantech leader? Absolutely. There are several reasons to believe that Israeli cleantech is here to stay.

First, human capital. “Israel has one of the world’s highest concentrations of scientists and engineers. It is similar to Boston and San Francisco. Within a fifty mile drive, you’ve got a half dozen of the world’s top research universities, ” said Jonathan Shapira, a business lawyer at Goodwin Procter and the founder of the Boston-Israel Cleantech Alliance.

Second, natural resources and lack thereof. Israel has plenty of sun, which enables it to serve as a laboratory for solar innovation. It lacks water and oil, which provides a strong and persistent incentive for the country to be a world leader in desalination and wean itself off fossil fuels.:}

I know this is hardly original an original observation, but President Obama really is one very cool customer.

The administration’s ability to steadily advance its low carbon agenda while facing conflicting pressures from Republicans (and some Democrats) angry at the proposed US climate bill, and diplomats in Copenhagen demanding the US shows more ambition, has been little short of a master class in political positioning. There is a long way still to go before he can declare victory, but you get the impression Obama will see some form of climate legislation passed early next year – and what is more, his opponents will not be quite sure how he did it.

The influential political blogger Andrew Sullivan has repeatedly observed how throughout both his campaign and his first 12 months in the White House, President Obama has outmanoeuvred rivals through almost preternatural displays of calmness and detachment.

Echoing Muhammad Ali’s famous rope-a-dope strategy, Obama has let opponents expose their own position, unleash wave after wave of ill-conceived attacks, and reveal their strength and weaknesses, while all the time he quietly and coolly weighs up his options. Then, just when his rivals think they are heading towards victory, he has acted with swiftness and no little ruthlessness to land his own decisive blows and end up with exactly what he wanted.

As rising seas overtake the shores and the human population continues to grow, some experts believe we’ll eventually have no choice but to live in a real-life ‘water world’, building hotels, homesteads and even entire cities on the open ocean. Forward-thinking architects are already planning for this possibility, and their futuristic designs range from Star Wars-inspired marine research facilities to luxurious undersea hotels.

My Guardian Comment column this week is about how the climate denial industry achieves its aims. What follows is a list of footnotes and references to go with that article

Ice was given $510,000 to test its messages in key markets, all of which happened to be the homes of members of the energy and commerce or ways and means committees of the US House of Representatives. The purpose was to “demonstrate that a consumer-based media awareness program can positively change the opinions of a selected population regarding the validity of global warming.” If it worked, Ice would “implement program nationwide”.

It identified “two possible target audiences”: “Target 1: Older, less educated males”. These people, Ice said, would be receptive to “messages describing the motivations and vested interests of people currently making pronouncements on global warming – for example, the statement that some members of the media scare the public about global warming to increase their audience and their influence … ”

Business can sometimes be exciting.