Solar is Free as a Bird man:

A Solar-Powered Solution to Florida Sprawl

An architect’s rendering of Babcock Ranch, which plans to provide for its electricity needs on site with solar energy

An NFL lineman turned visionary developer today is unveiling startlingly ambitious plans for a solar-powered city of tomorrow in southwest Florida’s outback, featuring the world’s largest photovoltaic solar plant, a truly smart power grid, recharging stations for electric vehicles and a variety of other green innovations. The community of Babcock Ranch is designed to break new frontiers in sustainable development, quite a shift for a state that has never been sustainable and lately hasn’t had much development. (Read “Is Florida the Sunset State?”)

“Some people think I got hit in the head a few too many times,” quips developer Syd Kitson, who spent six years in the trenches for the Green Bay Packers and Dallas Cowboys before entering the real estate business in the mid-1980s. “But I still believe deeply in Florida. And the time has come for something completely different.” (See the top 10 green stories of 2008.)

To anyone familiar with southern Florida’s planning-nightmare sprawl of golf courses, strip malls and cookie-cutter subdivisions named after the plants and animals they replaced, Kitson’s vision for his solar-powered, smart-growth, live-where-you-work city of 45,000 people east of Fort Myers is breathtakingly different. That’s why the press conference held today to reveal his development plans for the historic Babcock Ranch property will feature representatives from the Audubon Society, the World Wildlife Fund and the Sierra Club.

Contrary to the song, somethings you can change:

CORVALLIS, Ore. – Engineers at Oregon State University have discovered a way to use an ancient life form to create one of the newest technologies for solar energy, in systems that may be surprisingly simple to build compared to existing silicon-based solar cells.

These tiny, single-celled marine life forms have existed for at least 100 million years and are the basis for much of the life in the oceans, but they also have rigid shells that can be used to create order in a natural way at the extraordinarily small level of nanotechnology.

By using biology instead of conventional semiconductor manufacturing approaches, researchers at OSU and Portland State University have created a new way to make “dye-sensitized” solar cells, in which photons bounce around like they were in a pinball machine, striking these dyes and producing electricity. This technology may be slightly more expensive than some existing approaches to make dye-sensitized solar cells, but can potentially triple the electrical output.

“Most existing solar cell technology is based on silicon and is nearing the limits of what we may be able to accomplish with that,” said Greg Rorrer, an OSU professor of chemical engineering. “There’s an enormous opportunity to develop different types of solar energy technology, and it’s likely that several forms will ultimately all find uses, depending on the situation.”

“Dye-sensitized solar cells already exist,” Rorrer said. “What’s different in our approach are the steps we take to make these devices, and the potential improvements they offer.”

The new system is based on living diatoms, which are extremely small, single-celled algae, which already have shells with the nanostructure that is needed. They are allowed to settle on a transparent conductive glass surface, and then the living organic material is removed, leaving behind the tiny skeletons of the diatoms to form a template.

I gotta quit stealing from Go Media…all of them are still alive..

San Francisco and Portland might be engaged in some electric vehicle pissing contest, but I think both cities just got seriously spanked by Chicago!

The Windy City just unveiled the first solar-powered electric vehicle charging station during the IOC tour. The Solar Plug-In Stations will be used daily by the City of Chicago Department of Fleet Management to power the city’s electric cars.

“Carbon Day and the City of Chicago are demonstrating true innovation, ingenuity and initiative,” said Richard Lowenthal, CEO of Coulomb Technologies. “Solar energy and electric vehicles are an inevitable partnership that is one more step to reducing our dependence on foreign oil.”

The road you can not take:

(CNN) — When Jon Bohmer sat down with his two little girls for a simple project they could work on together, he didn’t realize they’d hit upon a solution to one of the world’s biggest problems for just $5: A solar-powered oven. 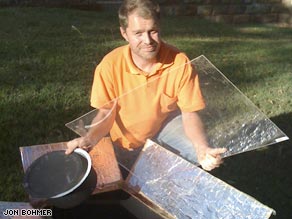 Inventor Jon Bohmer with the oven he has made out of a cardboard box.

The ingeniously simple design uses two cardboard boxes, one inside the other, and an acrylic cover that lets in the sun’s rays and traps them.

Black paint on the inner box, and silver foil on the outer one, help concentrate the heat. The trapped rays make the inside hot enough to cook casseroles, bake bread and boil water.

What the box also does is eliminate the need in developing countries for rural residents to cut down trees for firewood. About 3 billion people around the world do so, adding to deforestation and, in turn, global warming.

By allowing users to boil water, the simple device could also potentially save the millions of children who die from drinking unclean water.

Bohmer’s invention on Thursday won the FT Climate Change Challenge, which sought to find and publicize the most innovative and practical solution to climate change.

“A lot of scientists are working on ways to send people to Mars. I was looking for something a little more grassroots, a little simpler,” Bohmer said Thursday.

over 2000 people have watched this: