I do not run Dan’s stuff because he is funny, or relevant…I post his stuff cause he lets me.. 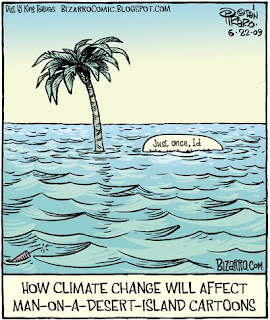 This special Prodigal Son Edition of Bizarro is brought to

you by Omnipotent Shipping.
For now, here is a tasty little morsel of cartooning that I hope you enjoy. This isn’t one of my preachy environmental cartoons, it’s just an amusing visual about what what will happen to all those tiny islands we cartoonists draw in those stranded-on-a-desert-island cartoons we are so fond of, if indeed the sea level rises.

This is a scientifically researched and accurate representation of such a scenario; tiny islands would disappear beneath the surface of the sea. Trees would pierce the surface in many instances, appearing to float. Caption balloons, being attached to their orator by the laws of graphics, would be at least partially obscured.