This Blog on frugality is pretty funny and maybe not for the Joe Sixpack crowd. Things like Retiring In Panama may miss them. But the post about living on food stamps was pretty informative and funny.

Festival of Frugality: Superheroes Are Frugal Too Edition

I am a sucker for a theme for my festivals or carnivals and while I was tempted to do a leap year facts edition it just wasn’t exciting enough for my blood. So superheroes it is. Because what’s more exciting than superheroes? It also occurred to me that superheroes are quite frugal and who hasn’t sometimes thought that superpowers are needed to stay on the path of frugality.

Annabelle from Shopping Detox gives her city a frugal audit. This really has me thinking about my own town.

A. Blinkin from Funancials entertains us as usual with how do you judge value?

Go there and read about Wolverine and Batman at least. More next week.

I have fun with google everyonce in awhile. I will pick an odd phrase, like today I typed in “beautiful energy conservation”.  As always Procter and Gamble, Siemens and Johnson Controls greenwash pages popup first. Google is such a money hog. But this site was #4 so I thought what the heck. What a pleasant surprise.

While BP may be on the top of the Corporate Shit list right now, There are a lot of corporations trying to make themselves look “Green”.  Here is just one example. Look at the product list at the bottom.

Meet the 17 polluters and deniers who are derailing efforts to curb global warming in Tim Dickinson’s “The Climate Killers.”

In 2007, when the world’s most powerful media baron announced his newfound conviction that global warming “poses clear, catastrophic threats,” it seemed as though the truth about climate change might finally get the attention it deserves. Murdoch promised that not only would News Corp. itself become carbon-neutral by 2010, but that his media outlets would explain the urgent need for a cap on carbon emissions. Climate change, he pledged, would be addressed as a sober reality across the News Corp. empire, whether as a plot element on 24 or in a story on Fox News. “I don’t think there’s any question of my conviction on this issue,” Murdoch declared. “I’ve come to feel it very strongly.”

Since then, however, Murdoch and his media operations have become the nation’s leading source of disinformation about climate change. In October, Fox Business ran an extended segment on “The Carbon Myth,” inviting a hack scientist to “make the case” that more carbon pollution is actually “good for the environment.” The Wall Street Journal has continued to lie not only about the reality of global warming but about Obama’s efforts to prevent it, denouncing climate legislation as “likely to be the biggest tax in American history.”

Read the whole article. It is pretty damning.

Oh and I can’t resist, this is the best collection of envirovideos I have ever seen.

I post about 4 of Dan’s cartoons a year because:

[]. he is good for the environment

b. his wife is gorgious 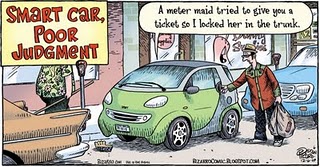 Dan Piraro’s cartoons are relentlessly funny, but honestly his blog is even funnier. I forgot to put this up yesterday but: 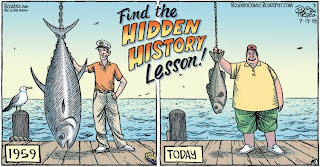 (To make the cartoon big, click on the seagull’s left knee)

Bizarro is brought to you today by Geriatric Mouse Voice.

Judging by the emails I got last week, this cartoon was very popular with environmentally conscious readers. Destruction of ocean life is far worse than most people realize because it is hidden under the surface. It’s hard to get good photos of all that is missing from the sea. Most experts estimate that 90% of all large ocean life has been decimated in the past 100 years. Red Lobster All-You-Can-Eat night, anyone?

And judging by some emails I’ve gotten recently, there are a number of readers who think I hate fat people and think they are fair game for ridicule. My point is not that fat people are “funny” or “bad,” but that human selfishness is ruining the planet, with Americans firmly in the lead. I know it is hard to resist food, I’ve battled it myself, we all have. And we’re not the only species prone to this, we’ve all seen what happens to dogs when too much food is made available. For millions of years, humans couldn’t be certain when their next meal would be, so our genes evolved to tell us to eat all that is available, especially the fatty stuff.

If you want to see more of Dan just Google him. He is literally the first 10 entries. But this is my favorite Dan thingy…his live show:

Or even the environment or residential energy conservation? Well Actually nothing but Dan lets me post a cartoon of his periodically here when I am completely out of ideas or when he is particularly brilliant which ever comes first. So when he asked his blog readers to reach out to media moguls and poobas to see if they might air a version of it like on Showtime or HBO I could not resist but first the toon: 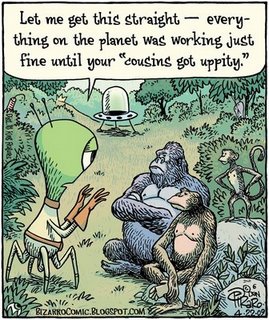 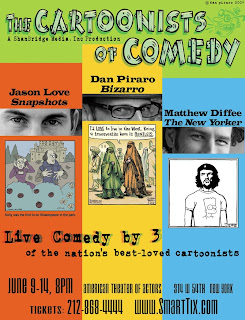 A RARE COMEDY EVENT COMING TO YOUR TOWN!!!
(If your town is New York City.)

I’m doing one of my increasingly rare comedy shows in NYC for an ENTIRE WEEK next month and I can’t bear the thought of going on unless you’re going to be there. Please don’t break my already fragile heart by saying, “I can’t afford to fly all the way to New York From Seattle,” or “I wish I could be there but I’m in prison until 2019.” What is more important to you? Your precious money or my flimsy ego? (Before you answer that, consider that I will give you an autograph when you come to the show, which you can then sell on eBay to offset $3-$4 of your airfare and hotel costs.)

Seriously, this is a big show for me. I do a talk or a short set now and then, most often on the West Coast, but I’m doing fewer of these long-form comedy shows all the time and this is a full week of performances off-Broadway in NYC, so there are a lot of seats to fill. Please come. If you can’t come, send someone you know in NYC to the show and tell them to tell me you said “hi.”

After the show, you’ll be able to meet me, Jason, and Matthew as we hang out in the lobby selling books, signing breasts, and pooping out witty ripostes like a member of the Algonquin Round Table. If you’re lucky, you might even meet CHNW!

Ticket info here. Hope to see you there!

So if you are the Chief Executive Officer of a cable channel like say:

Give these poor guys a break and send someone to their show. Thanks again Dan!
:}

OK I know that since I scrapped Weird Bird Friday I have only posted about Energy and Environmental Issues…BUT I spent the whole day tearing out nasty 50 year old insulation. There were thousands of mud hornets nests and wasp nests, along with some real live wasps. This was because there was an unsealed vent behind this 1950 paneling and very nasty filthy insulation full of dust. So the problem is fixed after 10 hours work and I am whipped. Energy Tough Love is sometimes a very tough dirty work. So….

My favorite sports writer and number 2 funny man Mike Nadel got terminated by the pukes at GateHouse News. Please go here to protest that:

Tell the jerk faces they made a mistake.

But you can also help Mike. He started a website or Blog and he needs our help and support SOOOO if you would go there and show your support that would be great. It’s:

Here is a sample that I think shows his wit and charm. Please football players stay out of ocean going fishing boats. NOTHING ever good comes from it:

^Since, first and foremost, I’m still a Chicago sports hack, it’s time to return to my roots with an update on what’s going on around town …

Bloody-sock boy Curt Schilling is telling people he wants to pitch for The Team That Championships Forgot, prompting the Sun-Times to ask readers: “What would Schilling look like in a Cubs uniform?”

The obvious answer: He’d look like an old, broken-down Cub.

There would be a sentimental reason to get him, I suppose. After all, it would be nice to have a current player who was an active big-leaguer when the Cubs won the ’45 pennant.

People are doubting and dissing the White Sox again, which means they’re a pretty solid bet. Seems whenever they are supposed to be bad they end up being good (and vice versa).

Still, Sox fans can’t feel too good about their heroes’ chances if they have to rely on a pitcher – Jose Contreras – who is old enough to be Schilling’s dad.

Jerry Angelo has a funny way of backing up his declaration that he needs to “fix” the QB situation.

Matt Cassel could have been had for a first-round draft pick. And several other quarterbacks, including Kurt Warner, could be had for nothing more than a pile of McCaskey moolah.

Though Orton isn’t an All-Pro, maybe Angelo finally has realized that the Bears’ receivers rank just a tad behind those Cassel worked with in New England and Warner threw to in Arizona.

Not that Angelo plans to actually bring in guys who can get open and catch the ball.

Good news, though, Bear Country … the GM is making progress in talks aimed at bringing back John St. Clair.

One need not read between the lines to recognize that John Paxson is getting tired of Vinny Del Excuse. All one has to do is read the lines.

After Del Excuse told a large media contingent that the new players Paxson acquired would need time and practice to fit in, the GM told the Tribune:

“I don’t see that as a big issue. It would be great to have some practice time … but that’s not the reason we didn’t play well in New Jersey and Washington. We didn’t come out ready to play.”

Paxson didn’t need to say whose job it is to get the team ready to play.

In their most recent game, the Bulls made an amazing fourth-quarter comeback to beat the Rockets. The most amazing thing: Del Excuse actually let his best player off the bench during crunch time, and Derrick Rose responded by leading the rally.

Interesting how that works.

Please pass his website around to all the Chicago fans and groups that you can. THANKS

If you think Christmas is about crass comercialism than go here:

But if you think Christmas is about lowering your use of fossil fuels, and other scare resources, please try here:

So I will just list them. Since you HAVE to read them EVERY day, nuff said right?

But not that one: it’s just the source…

I do the right thing:

(I borrow a lot from this one)

Of course if you just want to talk about the environment, while you puff your cigaret, eat your steak barely clothed in the winter with the thermostat set on 80 degree while scheming more uses for plastics, well then these sites are for you:

If you follow this regime everyday for a week you WILL be green. Good luck and may God Bless.